Special Feature: World Day of Prayer and Action for Children 2009

Commemorations for the World Day of Prayer and Action for Children 2009 took place across the globe. Larger events took place in Brazil, Kenya, Sri Lanka, Tanzania and the United States.

On November 14, hundreds of people from religious communities, NGOs and UN organizations from India, Maldives, Nepal and Sri Lanka came together with over 600 school children to commemorate the Asian regional inauguration of the World Day of Prayer and Action for Children. Dr. A.T. Ariyaratne, Founder of Sarvodaya Movement, Mr. Philippe Dumelle, Country Representative for Sri Lanka, UNICEF and Mr. Daniel Toole, UNICEF’s Regional Director for South Asia were among distinguished guests. The celebration included child friendly language and performances that convey spiritual messages. The event will culminate with a common meditation session unleashing a spiritual force for the well being of children across the region. The launch event will be followed by a week of action for the betterment of children through Sarvodaya and its network of partner organizations.

Brasilia, Brazil
The public and inter-religious continental launch event of November 20, Day of Prayer and Action for Children 2009, was held in Brasilia, Brazil, on November 17, 2009, in collaboration with the Global Network of Religions (GNRC).

The opening words of the event highlighted the historical significance of the meeting, attended by the membership and representation from major religious traditions of the country, besides the CELAM – Latin American Episcopal Council and CLAI – Latin American Council of Churches. Speeches called for increasing the number public policies and budget for childhood and adolescence as a way to prevent violence and create opportunities for the citizens, particularly children and adolescents, so they can have full development. The family must be strengthened, because it is the central core to build values and create conditions for the child development, proclaimed the participants. Religions must contribute for increasing the family ties as a reference in the lives of children in all continents.

New York, USA
On November 18, in New York, more than 50 representatives from religious, civil society and the UN communities gathered at Tillman Chapel of the Church Center for the United Nations. Religious leaders from the Buddhist, Christian, Hindu, Jewish, and Muslim communities and leaders from non-governmental organizations offered prayers, meditations, and petitions for the wellbeing of children.

Ms. Ann Veneman, Executive Director of UNICEF spoke on the global challenges to the implementation of the Convention on the Rights of the Child. Dr. William F. Vendley, Secretary General of Religions for Peace, shared a welcome remark noting the importance of prayers accompanied by actions.

Ms. Meg Gardinier, Director of World Day of Prayer and Action for Children Secretariat, shared the history of the initiative and invited all to join efforts in taking concrete and measurable actions for children. She noted Save the Children’s Survive to 5 campaign and Covenant House’s call to organize a toy, coat or food drive for the homeless children in New York City. 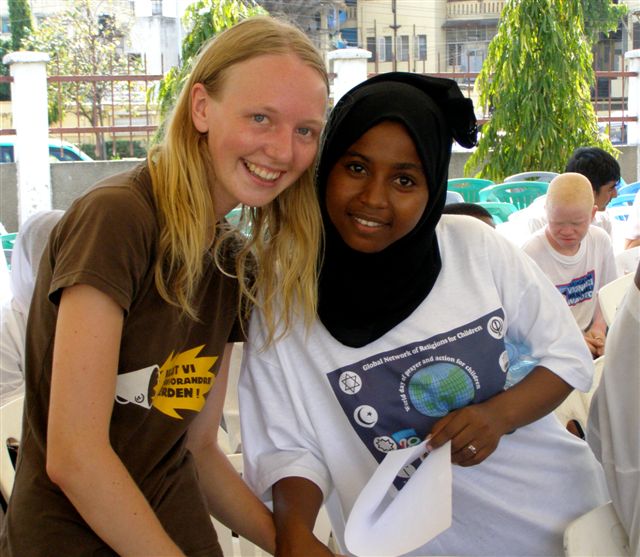 On November 20, GNRC Africa jointly hosted commemorative events for the World Day of Prayer and Action for Children with partners and representatives from humanitarian organizations and government s in Kenya, Somalia and Tanzania. In Isiolo and Garbatullah, Kenya, GNRC Africa co-hosted a celebration with the Islamic Foundation and the Children’s Relief Fund.

In Isiolo, GNRC members, peace activities and civil society members visited the Pepo la Tumaini Jagwani – a center which runs an HIV/AIDS Community Rehabilitation Program and the the Islamic Foundation’s Al-Falah Children Home. Pepo la Tumaini Jagwani is a community based organization established by two teachers who had been trained as HIV/AIDS counselors with an aim to reduce stigma and discrimination while lobbying for the rights of people- especially children, living with HIV/AIDS. The Al Falah children’s home houses around 150 orphans where they are provided with food, boarding, clothing schooling, medical care and religious education.

At the commemorative event in the morning, students from local schools gathered at Al-Falah Children’s Home for special prayers and a peace march to commemorate the World Day of Prayer and Action for Children. Following the peace march, songs, dances and poems of children were shared. Plight of children in Kenya and around the world were also presented to the participants. Special prayers were offered by reverend Steven Kalungu and children from the Al-Falah children’s home. Rechargeable radios were distributed by the GNRC to the local peace clubs, families and participants to listen to the ongoing ethics education radio program launched by GNRC Africa. The Local Isiolo mosques and churches were also encouraged to discuss children in the sermons and ser vices of the day.

Similar commemorations were held in Garbatullah, Kenya and Hargeisa, Somaliland.