Ideas for Action on Positive Parenting

The evidence that corporal punishment is harmful to children, adults and societies is overwhelming. According to a recent study by the Global Initiative to End Corporal Punishment of Children, more than 150 studies show associations between corporal punishment and a wide range of negative outcomes, while no studies have found evidence of any benefits.1 In this article, the first in a series entitled Ideas for Action, World Day of Prayer and Action Council Member, Lena Karlsson and her colleague Sara Johansson, share some key features of Save’s global positive parenting programs. We hope that this article will both inform and inspire World Day affiliates who may be planning positive parenting initiatives for the World Day this November and/or longer term programs.

Following this article, you will find a list of action steps that you can take on World Day and throughout the year. Following that is a list of resources for further reading and a list of contacts for further assistance.Lena Karlsson, Director of the Child Protection Initiative at Save the Children, is a Council Member of World Day of Prayer and Action for Children. In this article, Karlsson and her colleague, Sara Johansson, Advisor for Child Protection, share the major components of their program to teach parents non-violent child-rearing practices. This global program provides parents and teachers with the information, training and skills required to raise children without resorting to violence. Save also advocates for the legal abolishment of corporal punishment, together with civil society partners, including children.

Start with children’s reactions. In the experience of Save the Children, the best place to learn about the impact of corporal punishment on children is to ask the children themselves. The answer is always the same: no child likes being hit. Children say they feel hurt, or angry, or even frightened of the parents after being physically punished. Studies reveal that corporal punishment can also cause children to intensely dislike the persons who hit them. Furthermore, corporal punishment: 1) drives wedges between parents and their children, preventing the closeness that children need with their parents to thrive, develop and grow; 2) teaches children that the way to deal with problems is to hit others; and 3) teaches children, when they have grown and become parents, to hit their own children. Overall corporal punishment communicates that violence is acceptable.

Provide parents with an alternative to corporal punishment. Save the Children found parents are genuinely surprised to learn that: 1) corporal punishment is considered violence against children; 2) it can be harmful to children even if it is not visible; and 3) it is ineffective and counter-productive. Save reports that parents also say they don’t like to hit their children and deeply regret when they learn what their children say about being hit. Some parents say it is the only form of child rearing they have known because they were also hit by their parents. However, until parents discover how harmful it really is to hit their children and until they learn to use other more effective methods of guiding and training their children, through non-violent parenting skills, this negative behavior—hitting children and other forms of physical punishment—will continue.

Awareness and training. Save the Children’s holistic program helps trainers, parents, teachers, community leaders, religious leaders, government staff and other participants to understand: 1) the principles of child development, such as how children think and feel and how they learn; 2) research on effective parenting; 3) child rights; and 4) the negative effects of corporal punishment on children, not only on their bodies but also the psychological damage it causes. Participants are then trained in other ways of guiding and correcting children, and of providing warmth and structure.

"I have learned from my parents and grandparents that spanking is a form of discipline. In our community, if a parent does not spank his or her children, he or she is considered a bad parent, a parent who does not know how to discipline children. Let us avoid hurting our children because this has a negative effect on them. Maybe it’s not yet too late to change our old ways." 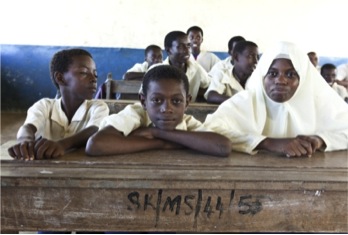 Schoolchildren during class at Marumbi Primary School in Ugunja, Zanzibar. The school adopted positive and non-violent teaching methods a year ago and works in partnership with Save the Children and the Zanzibari Government.

Train and convince local staff first, they become better advocates. Changing laws, attitudes and behaviors require focused information and awareness-raising efforts by committed staff. When Save the Children initiated its program to end corporal punishment in the Philippines in 2003, it was accepted, expected, and legally permissible for parents to physically punish their children. Save the Children deliberately began with its own local staff members, many of whom were parents, to explain the concept of ‘positive non-violent parenting’ and the negative consequences of corporal punishment to convince them of its benefits and train them on the issues. The reasoning was that once the local staff members were convinced that physical punishment was not in the best interest of the child, they would become even better advocates, better trainers of others and be better able to challenge the accepted social norms and legal boundaries. Save the Children found that this idea worked very well.

Try to reach and include fathers. In the experience of Save the Children, fathers are hard to reach and are not often involved in parent-training workshops. Mothers usually attend training sessions even though it is the fathers who usually make the decisions in the household. At the request of villagers, Save the Children is making special attempts to find ways of reaching men and fathers by working through village leaders and religious leaders. Efforts include asking local religious leaders in various countries including Afghanistan, Sudan and Zanzibar to reach more men by promoting messages against child violence and for the protection of children. It was found that this was an effective way of reaching out to the communities. Save the Children has also become a partner of MenCare, an educational and support campaign that is targeting fathers. Its mission is to promote men’s involvement as equitable, non-violent fathers and caregivers in order to achieve family well-being and gender equality.

Recognize that long-term solutions require careful layers of advocacy, education and training. There is no easy solution when trying to prevent corporal punishment of children and promote non-violent parenting skills instead. Save the Children knows that it can takes years of patient work by many different groups and partners in several areas to ensure long-term solutions. It tackles the task in separate but inter-connected steps, providing education, training for behavior change, and working towards legal reform. For example, Save the Children began to work on legal reform in the Philippines in 2003 and it is hoped that the Philippines might soon enact a law banning corporal punishment. If it does, it could become the 35th country in the world, and the first in Asia, to do

Local partnerships. Save works in close consultation with local partners for several reasons: 1) they understand local customs and traditions; 2) they know how to advocate for change locally; and 3) they are familiar with local civil leaders and religious leaders who will be strong supporters and advocates for these changes. As one example, Save presently partners locally in the Philippines with Children & Youth Organization (CYO) and Zone One Tondo Organization, (ZOTO) a network of over 600 local and urban organizations working within 28 urban poor communities to share non-violent parenting methods.

Religious leaders as partners. Save recognizes the importance of collaborating with civil leaders and religious leaders at the local level for a number of reasons: 1) to advocate for a ban on corporal punishment; 2) to explain why corporal punishment is harmful for children; 3) to promote positive non-violent parenting skills; and 4) to encourage parents and teachers to engage in training to change these practices.

Since religious leaders are held in great esteem by members of their houses of worship and their congregations, they can be extremely powerful advocates when they include such information in their sermons and other messages to their communities, as well as in their personal contact with individual members. Religious leaders are also respected by government officials, and are therefore strong allies in convincing local and national governments to change laws pertaining to corporal punishment. 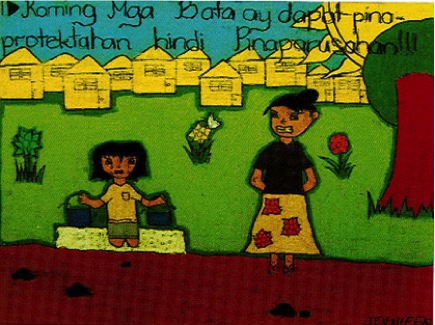 Drawing from the cover of a Save the Children Manual - A Time for Change: Ending all Forms of Corporal Punishment of Children.

The World Day of Prayer and Action for Children – celebrated on Universal Children’s Day (20th November) of each year — is a social movement dedicated to ending violence against children. All people of goodwill who care about children are invited to plan and participate in the World Day activities. If you are interested in working with communities and parents to end violence against children, here are some ideas you could consider for this year and for the future:

Global Initiative to End All Corporal Punishment of Children

Global Initiative to End All Corporal Punishment of Children

Save the Children Sweden

World Day of Prayer and Action for Children

The major characteristics of positive discipline are that it:

*Note: The World Day of Prayer and Action for Children leadership recently engaged its Council members in a broader discussion about the correct terminology to utilize on child rearing practices. We have learned that in some cultural and religious contexts, the word “discipline” may be considered inappropriate and other terminologies may be preferred. A roundtable discussion of religious scholars is planned to explore this in greater depth.

However, the Save the Children program is based on a program entitled “Postive Discipline” and the World Day Secretariat wanted to provide some background from specialist Dr. Joan Durrant on why Save uses this term and its implications for their program.