Launched in 2008 by Arigatou International, the World Day of Prayer and Action serves as a beacon to reinforce and magnify global efforts to end violence against children.  Local people who know best what children and families need in their areas organize these efforts. And uniquely, this work brings together governmental, non-governmental and intergovernmental organizations, as well as religious communities, to aim for outcomes as far-reaching as possible.

In 2012, World Day partnerships on 20 November led to scores of campaigns, workshops and seminars: a total of 107 activities in more than 62 countries.  The scope of the outreach was tremendous, thanks to all who prayed, acted and supported the cause!  Here are key findings of the 2012 final report, which was designed to: 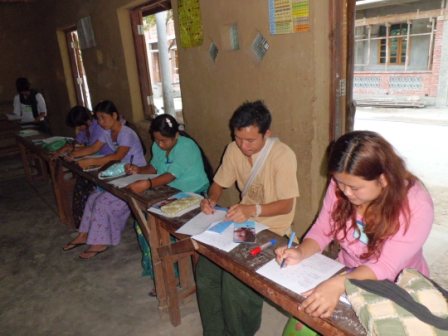 Did we achieve our goals and objectives for 2012?

What themes made an impact?  Strides were made in three areas of activity: (1) Education for Children’s Rights; (2) Promotion of Positive Parenting; and (3) Encouraging Solidarity among Children.

Pre and post tests conducted in India and Myanmar show evidence of knowledge gained in two content areas:  positive parenting and child marriage. In other words, people learned more about these areas than they knew before the World Day activity.

The World Day views this interest as a hopeful sign.  Positive change can happen in society when we hold on to the vision of a world where children can safely learn, grow and flourish. A majority of the reporting organizations rated the World Day’s themes highly.

Who planned the activities?  Non-Governmental Organizations (NGOs) were the largest group, followed by local worship communities, faith-based organizations and United Nations groups. One organization cited over 400 NGOs as partners in planning. Others reported partnering   with as many as 57 organizations for World Day 2012.

Who came to World Day 2012? A significant number of participants were children from one to 17 years old.  In fact, a third of respondents reported that 75 to 100% of attendees at their activity were children. As for religious participants, most were either Christian or Muslim.  Others identified themselves as Buddhist, Hindu, Sikh, or “Other” (including Rastafarian, atheist/agnostic, or Native American).

How was outreach done? Most activities were mobilization campaigns, many of which had more than 1,000 people attending.  Religious services brought 201 to 500 worshippers together. Educational activities brought 51 to 200.  Workshops usually had 21 to 50 persons taking part.

Role of the Secretariat

Why do organizations choose to take action with the World Day Secretariat?  Respondents in the 2012 report affirmed the partnership-building role of the Secretariat,  citing  “developing partnerships” as a major reason for becoming involved.

Other reasons are as varied as the groups themselves.  Interreligious groups said they appreciated help in distributing information. United Nations and faith-based organizations valued the technical assistance. And many wanted to engage young people in the efforts, while advancing multi-faith collaboration.

Two challenges the 2012 report raised were:

What decisions need to be made as we move forward?

One key issue concerns how we will define growth in our worldwide network.  Should the World Day try to open up more territories and find new partners?  Or remain with current partners and help build up their capacity?

More than 90% of respondents said they would participate again.  We hope you will be one of our partners in 2013!